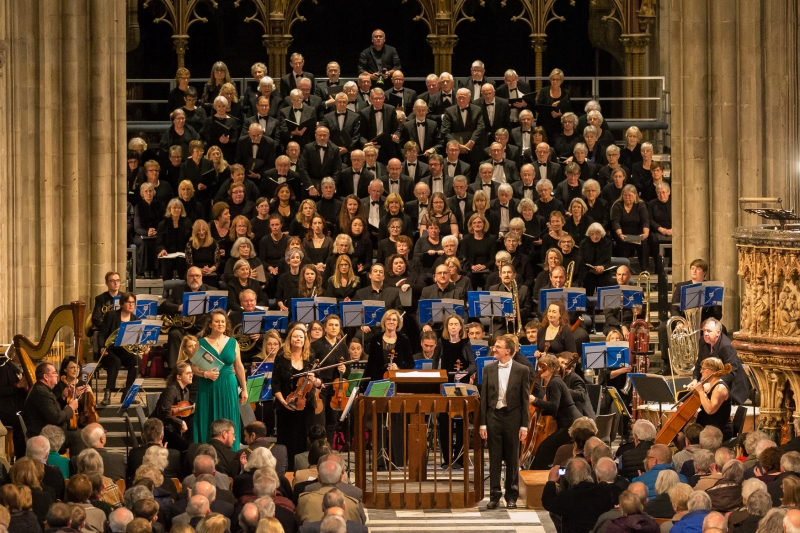 Featuring sweeping scoring that recalled epic biblical movies, intimate lullabies, ethereal chorister narration and quirky musical motifs, the audience was treated to a true odyssey of choral music. The Vaughan Williams work also has a historic link to Worcester, as it was first premiered in Worcester Cathedral as part of the 1954 Three Choirs Festival, conducted by Vaughan Williams himself.

Several audience members had also enjoyed a complimentary, three-course meal for two just before the concert, courtesy of the Choral Society's 2018-19 season hospitality sponsor, Côte Restaurant in Worcester High Street. The restaurant is running a special prize draw open to everyone booking tickets through the choir’s website in its current concert season, with the chance to win one of five, three-course pre-concert dinners for two people each time.

Ben Cooper, Chairman of Worcester Festival Choral Society (pictured at the restaurant with restaurant manager Emma Morgan), said: “This was a truly memorable concert for all involved. I think many audience members found themselves discovering two choral works that they will revisit again and again!"

Côte Restaurant offers French brasserie-style dining. The Prestige Set Menu that prize draw winners can pick from includes classics such as steak frites and grilled salmon, with crème caramel or chocolate mousse for dessert. With the restaurant only a few steps away from Worcester Cathedral, winners can take their seats in plenty of time. Each winning pair also receives a Kir Royale or soft drink per guest and a concert programme. The remaining two WFCS concerts offering a Cote 'win a pe-concert dinner' prize draw this season are Handel's Messiah (8 December) and Mendelssohn's Elijah (23 March).

There was a rapturous reception when one of the region’s most accomplished choirs, Worcester F... read more

Worcester Festival Choral Society has been deeply saddened to learn of the death of one of our forme... read more