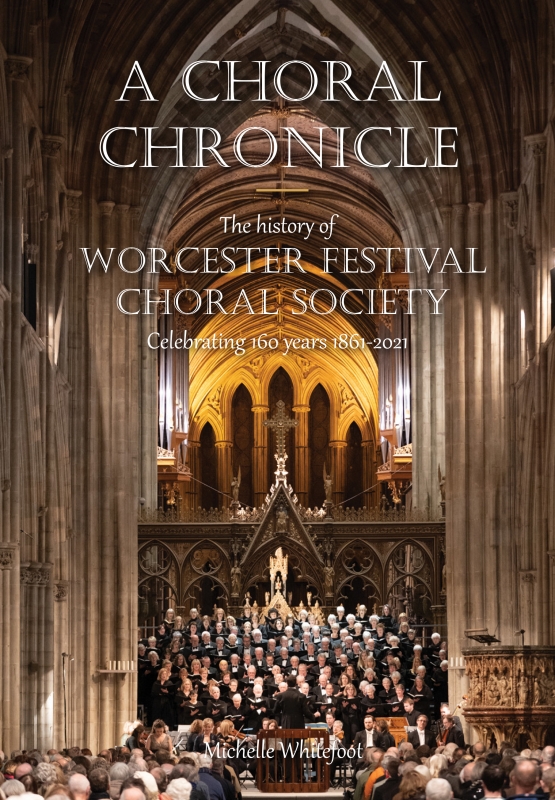 One of the leading Choral Societies in England, Worcester Festival Choral Society, has marked its 160th anniversary in 2021 with the publication of a new, fund-raising book revealing its impressive musical history.

Penned by soprano member and writer Michelle Whitefoot, the publication aims to raise funds for the 150-strong Society, which in normal times stages three, major concerts each year at Worcester Cathedral, performing choral greats such as Handel’s Messiah and Verdi’s Requiem.

“It was a fascinating project,” said Michelle. “We now have fresh insights into how the Society began, the changing challenges it has faced, its musical achievements and its key characters. Well-known names linked with the Society included Sir Edward Elgar, who chose WFCS to premiere two of his choral works and led its Band in the 1890s. Sir David Willcocks was the Society’s Conductor in the 1950s and Sir Stephen Cleobury was a singing member in the 1960s. Guest concert conductors have included Sir Adrian Boult and Sir Hubert Parry. The Chorus has also sung at the Royal Albert Hall, made numerous recordings and provided many singers for the renowned Three Choirs Festival Chorus each year. It’s an interesting read, especially as we all await the moment when large choirs are allowed to sing again!”

Within a week of publication, almost 100 books have been sent to customers across the UK. “So many people have sung in Worcester Festival Choral Society and enjoyed its concerts over the decades, that its history of interest to a surprising number of people,” Michelle added.

A Choral Chronicle costs £25, with 100% of profits going to the charity’s funds. Copies are on sale at Bygones of Worcester and Worcester Tourist Information Centre; or order online from www.wfcs.online/book.

Hallelujah! WFCS is back on song after Covid and Storm Arwen

Worcester Cathedral rang out to the sound of 150 choral voices for the first time in two years on Sa... read more

Mozart and Fauré return to Worcester!

Classical music lovers are in for a treat this autumn, when the 150 voices of the region’s lea... read more

WFCS is back on song, with double cause for celebration!

Singers from one of the region’s leading choirs, Worcester Festival Choral Society, have a dou... read more

In light of the ongoing limitations surrounding large gatherings and live performances due to Covid-... read more