Come to Worcester Cathedral on Saturday 17 March 2018 to experience one of the truly great choral works - Joseph Haydn’s oratorio masterpiece, The Creation - with 150 voices, and acclaimed soloists including soprano Sarah Fox. 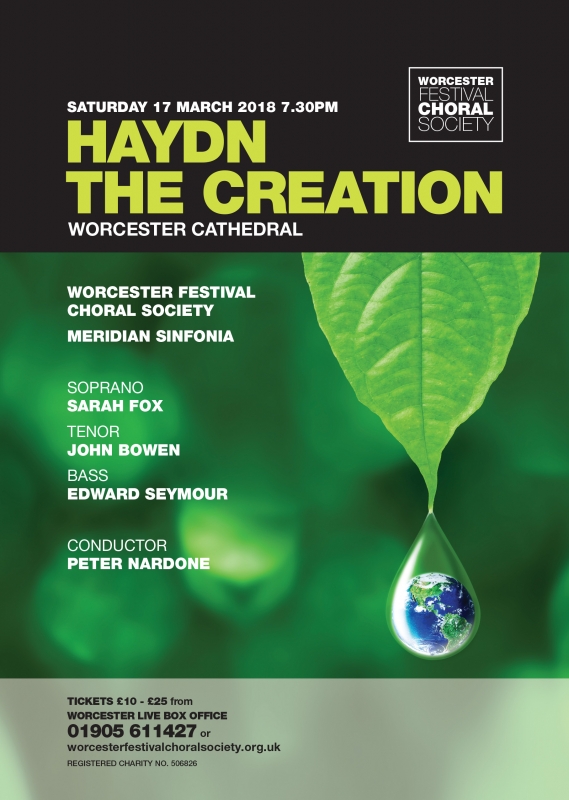 Telling the story of the creation of the world, Haydn was inspired to compose The Creation in 1796-8 following his trips to London, where he heard Handel’s oratorios being performed with huge choral and orchestral forces. Sourcing texts from Genesis chapter one and Milton's Paradise Lost, the work begins with a then-groundbreaking orchestral opening reflecting primordial chaos, and continues to convey the seven, picturesquely described days of Creation, ending with a chorus of praise.

Haydn was both inspired and moved by his subject matter. He reportedly said that, having begun composing the work, he begged God to let him be able to finish it – sensing it would be amongst his best.

The concert will be sung in English. Performing with Worcester Festival Choral Society will be the Meridian Sinfonia and soloists Sarah Fox (soprano - below centre), John Bowen (tenor - below right) and Edward Seymour (bass - below left). Worcester Cathedral Director of Music, Dr Peter Nardone, conducts.

To see the old flyers from previous concerts click here