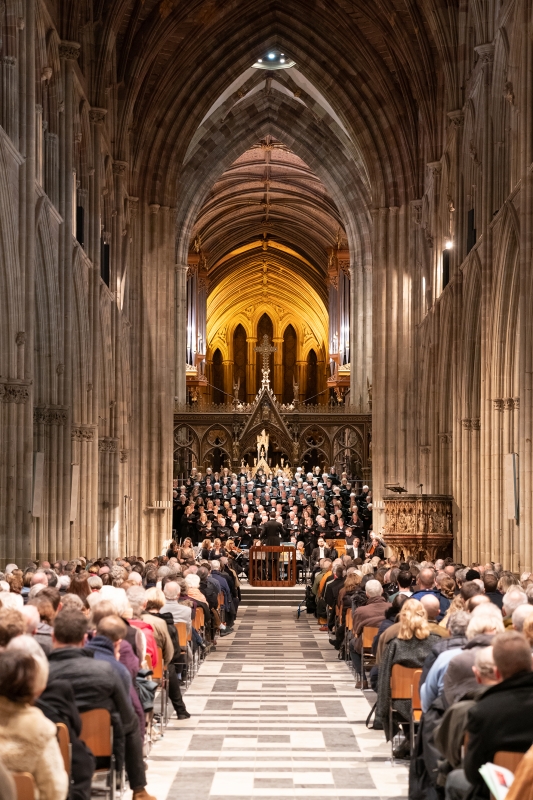 Worcester Festival Choral Society, founded in 1861, is one of the oldest and most prestigious choral societies in Britain.

The Society had close associations with the Elgar family from its early days, with Sir Edward Elgar leading its Band in the 1890s and often conducting his own works at its concerts. Elgar also wrote two choral works that were premiered by the Society: The Black Knight (1892) and Scenes from the Bavarian Highlands (1895).

Since then WFCS's musical programmes have been continually enterprising and exciting; encompassing not only the great, traditional works of choral repertoire, but also contemporary works from both home and abroad.

Within its core activities taking place from November - March each season, Worcester Festival Choral Society performs three, major concerts in Worcester Cathedral each year. It also runs a popular, annual 'Come and Sing' one-day choral workshop each spring, which attracts many keen singers from outside the Society.

To see our complete concert repertoire since 2001, and many concerts further back, visit our past Concert Poster Gallery.

Alongside its main concerts, over the years Worcester Festival Choral Society has achieved several choral 'firsts', as well as undertaking regular special projects.

Many singers from the Society are selected each year to perform in the Festival Chorus at the world-renowned Three Choirs Festival, which has taken place in rotation at the Cathedral cities of Worcester, Hereford and Gloucester for more than 300 years. In 2015 a massed Festival Chorus, including many of our members, performed a special, massed recital for The Prince of Wales at Buckingham Palace, to mark the tercentenary of the Three Choirs Festival.

The Society has also sung at many other festivals, notably at King's Lynn and at Elgar Festivals in the Royal Albert Hall. In 1991 and 1992 it was invited to join the BBC Singers and Chorus in Elgar concerts in the Symphony Hall, Birmingham. In 1994, the Society gave the first UK performance of the then recently discovered Messe Solennelle by Berlioz. To mark English Music Year, it commissioned the choral and orchestral work from then conductor Dr Donald Hunt, A Song of Celebration; while in 2004 it commissioned a major choral work from Adrian Lucas, Creation Canticles. Also in 2004 the choir joined forces with the City of Birmingham Choir and the CBSO in Britten's War Requiem in Symphony Hall, Birmingham.

Over the years the Society has broadcast with the BBC Welsh Symphony Orchestra and the BBC Philharmonic Orchestra. It has also contributed to many commercial recordings made at Worcester Cathedral, including The Crucifixion by John Stainer .

In 2011 the Choral Society celebrated its 150th anniversary with an epic performance of Walton's Belshazzar's Feast and an anniversary dinner held in the Guildhall Worcester; attended by four of its past and present Conductors, Sir David Willcocks, Dr Christopher Robinson, Dr Donald Hunt and Adrian Lucas.

In 2015 Worcester Festival Choral Society joined the Worcester Cathedral Choir to record a special 'Christmas from Worcester' CD of Christmas Carol favourites at Worcester Cathedral, in tribute to its former conductor, the late composer, Sir Desmond Willcocks. The CD was so popular that it entered the UK Classical Music Charts.

In autumn 2019, the Chorus gave a rare performance of Lux Perpetua, a mini war requiem by Worcester-born composer Jonathan Willcocks.

Due to the global pandemic the Society was unable to stage any concerts between March 2020 and November 2021.

Since the pandemic, however, Worcester Festival Choral Society has once again been bringing 'the choral greats' back to Worcester Cathedral in superb style, attended by audiences of several hundred music lovers. With recent performanes including Vaughan Williams's A Sea Symphony, Handel's Messiah, Bach's St John Passion and Elgar's The Dream of Gerontius, the stage is set for many more decades of magnificent music-making!

Since its foundation Worcester Festival Choral Society has had 11 conductors, most being Directors of Music at Worcester Cathedral. In the past 70 years these have included Sir David Willcocks, Douglas Guest, Christopher Robinson, Dr Donald Hunt and Adrian Lucas. Dr Peter Nardone took on the role until from 2012 to 2018, followed by Christopher Allsop during the 2018-19 season. Today the Society's conductor is Worcester Cathedral's Director of Music Samuel Hudson, who took over the role from September 2019. Samuel's outstanding musicianship continues to enable the Society to achieve ever higher standards of performance, whilst sharing the joy of choral singing.

Since 2013 we are delighted to have been accompanied at our concerts by the excellent Meridian Sinfonia orchestra, which draws from some of the UK's most talented musicians nationwide.

For several years, Worcester Festival Choral Society has been indebted to the services of professional photographer Michael Whitefoot, who has taken live concert photography at the majority of our performances. Thanks to his unobtrusive personal presence and immense photographic skills in often challenging lighting conditions, his photos of our Chorus, Conductor, soloists, musicians and magnificent venue have brought our marketing, PR and online presence to life.