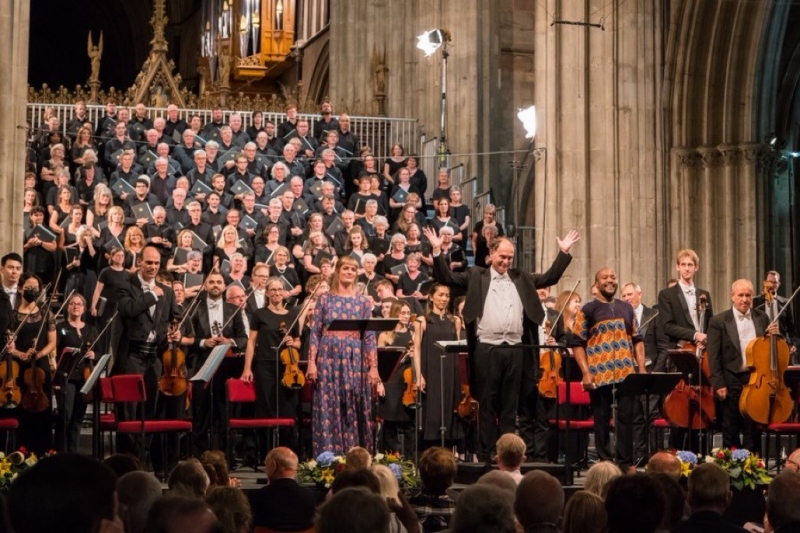 When Worcester Festival Choral Society was originally established in 1861, it was partly to provide highly skilled singers to the world-renowned Three Choirs Festival Chorus, which performs many of the Festival's annual flagship concerts in Worcester, Hereford and Gloucester Cathedrals. Today, WFCS members are proud to continue forming a major part of the Festival Chorus each year.

The Three Choirs Festival is the oldest, non-competitive classical music festival in the world, and celebrated its 300th anniversary in 2015. It comprises a week-long programme of choral and orchestral concerts, cathedral services, music recitals, masterclasses, talks, theatre, exhibitions and walks, rotating each summer between the beautiful English cathedral cities of Worcester, Hereford and Gloucester.

At the heart of each Festival are the large-scale evening concerts featuring the Three Choirs Festival Chorus, internationally acclaimed solo artists and the Philharmonia Orchestra, which has been resident at the festival since 2012.

Concert programmes combine established favourites of the British classical choral tradition, with works drawn from a broader, more international musical canvas. Some are conducted by the directors of music of the three cathedrals, who also undertake the role of artistic director of their city’s Festival, and some by guest conductors from the UK and abroad. In 2017, a performance of Elgar's The Dream of Gerontius was attended by the Three Choirs Festival's President, HRH The Prince of Wales.

In July 2021, the Festival returned to Worcester (having been postponed from 2020); with our Director of Music, Samuel Hudson, as its Artistic Director. Featuring more than 40 singers from Worcester Festival Choral Society, the Festival Chorus performed in three, major choral concerts at Worcester Cathedral - including an ambitious world premiere commission The World Imagined by composer Gabriel Jackson - all of which garnered particular praise from attending music journalists.

The 2022 Hereford Festival - in which many WFCS chorus members also sang - saw a full programme of evening flagship concerts once again, which garnered critical and audience acclaim.